I encourage you to prayerfully consider becoming a sponsor to a child that needs the love and encouragement that the Lord has called us to show in Jesus' name.

I have also had the honor of getting to know a young man in the Philippines named Cykei and a young lady in Tanzania named Epaso. The Lord has blessed me as their sponsor since they each were very young. Each has become a part of the family - even my young children, as we look through family photos, smile and recognize them by name. We correspond frequently through letters and pictures and I hope one day to make the trip to each of their home villages and meet them face to face.

“In response to the Great Commission, Compassion International exists as an advocate for children, to release them from their spiritual, economic, social, and physical poverty and enable them to become responsible and fulfilled Christian adults.”

I have the honor and privilege of being involved with Compassion International as part of their Artist Ambassador program, using my gifts to glorify the Lord, and to be a voice on behalf of His precious children, as stated in Compassion's Mission: 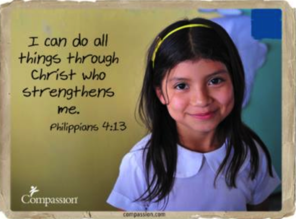